Fram returned from Buenos Aires in 1914 and was moored at Horten, exposed to wind and weather. After World War One, a number of committees worked on preserving the polar ship, but without results. The project´s strongest proponent, Otto Sverdrup, was elected chairman of the Fram Committee in 1925. He struggled on untiringly together with the committee´s members and several other key people for years. In 1929 Fram was towed to a shipyard, the Framnæs Mekaniske Verksted in Sandefjord. Here, under Otto Sverdrup´s supervision, the ship was repaired with the excellent support of Consul Lars Christensen.

In 1930 Fram was finally restored to the condition it was in during Otto Sverdrup´s expedition to the islands to the northwest of Greenland. Otto Sverdrup died in the same year as Fram participated on a large venue in Trondheim. It took a long time before she finally got a permanent home. In 1934 the Oslo Association of Architects offered to hold an architecture competition to design a building for the honoured vessel. Sixty entries were submitted and the winner was the architect Bjarne Tøien with his entry “Saga”. Fram was pulled into her new home by an electric motor. The ship moved one centimeter per minute. On May 20th 1936 the Fram Museum was finally opened. Both His Majesty King Haakon VII and His Royal Highness Crown Prince Olav were present. A national monument was finally in place.

Today the Fram Museum contains exhibitions of the most famous voyages of global historical significance. The centerpiece of the museum is of course the world´s strongest wooden ship, the polar ship Fram. The public can go on board and take a look around in her cabins, lounges, cargo hold and engine room.


The Gjøa building, which is connected to the Fram with an underground tunnel, houses Gjøa, the first ship to navigate the whole of the Northwest Passage. She stood outside the Fram Museum for forty years before she finally had her own protection building in 2013. Before that she was exhibited on a beach in Golden Gate Park in San Francisco.

Both buildings match in shape and colour


There are brand new historical exhibitions on the expeditions of Gjøa and Maud, of the airplanes N24 and N25 as well as of the airship Norge, John Franklin's legendary expedition and those of Henry Larsen and Eivind Astrup.

Welcome to a bigger and an even more exciting Fram Museum! 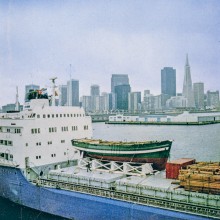