Lessons From the Arctic

The crossing of the Equator was celebrated with a four course dinner, aquavit, beer, Madeira and cigars followed by an evening show on deck. Hjalmar Fredrik Gjertsen did an exotic dance, dressed as «a sweet little temptress with lovely locks» (Gjertsen's diaries) while Thorvald Nilsen performed a minstrel routine and sang «With the Heart in the Right Place» with a large red heart painted on the seat of his trousers. The ship's gramophone was also brought on deck and coffee, schnapps and cigars were served during the show.

Music: Henry Burr – In the Shade of the Old Apple Tree (1905), a favourite with Roald Amunden and the only tune he had learned to play reasonably well himself.

Notice the horizon and how the Fram, being built especially for the ice, rolled quite a lot at sea.

Various scenes of the dogs at work and rest during the third Fram expedition (1910-1914). The dogs were picked up at Fredriksholm Island in Kristiansand, Norway before departure for Antarctica. At the island they had been fed well on horsemeat. (One horse was slaughtered every day as food for the dogs.) Once onboard Fram, the dogs were given water three times and food once per day and did reasonably well during the six month voyage to other end of the earth. Their strength was one of the keys to Roald Amundsen being the first person to reach the South Pole.

This reconstruction shows Olav Bjaaland working on the sledge and and Jørgen Stubberud made sledging crates lighter and thinner with the axe.

This reconstruction shows Oscar Wisting working on his Singer sewing machine. He made "sausages" for the milk powder, anoraks and tents among other things.

This reconstruction shows Kristian Prestrud and Helmer Hanssen strapping the sledging crates to the sledges.

This reconstruction shows Kristian Prestrud working in the observatory. 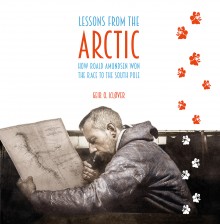 The book Lessons from the Arctic