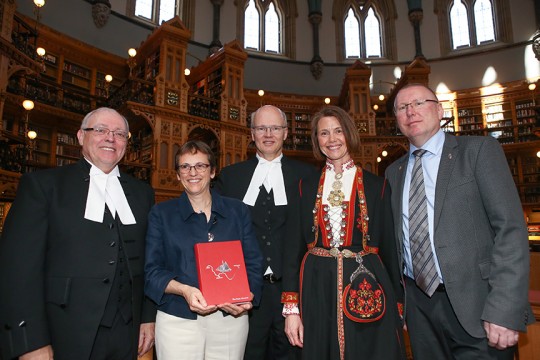 A special english edition of Roald Amundsen’s personal diary from the Northwest Passage was launched at the Canadian Parliament on 1 June 2017. The special one-volume edition was made by the Fram Museum at the request of the Norwegian Embassy in Canada as the official gift from Norway to Canada In connection with Canada’s 150th Anniversary and the celebration of 75 years of diplomatic relations between Norway and Canada.

500 copies of Amundsen’s diary will be given to libraries and relevant organisations all over Canada. 100 copies follow the 150-day Canada C3 expedition from Toronto to Victoria via the Northwest Passage.

The speech by the Honourable George J. Furey, Speaker of the Senate of Canada

Je vous remercie tous de votre présence parmi nous ce matin. C’est un grand honneur pour moi de vous souhaiter la bienvenue à cette cérémonie.
From the Norse sailors who explored Newfoundland and Labrador a thousand years ago, to current collaborations in many areas – arctic affairs, promoting security and human rights, and spurring entrepreneurship, research and education – Canada and Norway’s histories are closely intertwined.
Bound together by common values, by common geography, and by common challenges, our two nations have much to offer each other.
There is perhaps no better personification of the value of mutual cooperation than the great Norwegian explorer Roald Amundsen.
Amundsen credited his successes not to any extraordinary courage – though he undoubtedly possessed more than his share – but to careful planning based on research, experience and teamwork.
The traditional knowledge he gleaned from the Netsilik Inuit – in a place now named after his vessel, Gjoa Haven, Nunavut – would allow him to overtake the British team led by Robert F. Scott, in his journey to the South Pole.
In his account of the race to the South Pole, Roald Amundsen made a statement which remains relevant to this day:
“We must always remember with gratitude and admiration the first sailors who steered their vessels through storms and mists, and increased our knowledge of the lands of ice in the South.”
En tant que nation arctique, le Canada est fier de poursuivre son héritage de recherche et d’exploration.
(As an Arctic nation, Canada is proud to carry on his legacy of research and exploration.)
Since 2003, the Canadian Coast Guard has operated the CCGS Amundsen, a research icebreaker which has now travelled over 10 times the circumference of the earth, having accommodated over 1,500 researchers and other professionals from 20 different countries.
Our two nations’ recent signature of the Arctic Council’s Agreement on Enhancing International Arctic Scientific Cooperation heralds an era of enhanced research cooperation.
Nous reconnaissons tous l’importance de préserver les travaux de Roald Amundsen pour le bien public.
(We all understand the importance of preserving Roald Amundsen’s works for the public)
In light of his legacy, we commend the Fram Museum for their meticulous restoration of the Gjøa.
Roald Amundsen credited the beneficial relationship between his team and the Netsilik Inuit to early gestures of friendship and goodwill.
In his autobiography, Amundsen observed how people can communicate without a common language.
He observed that “gestures … convey meaning with astonishing accuracy.”
It is in this spirit that I express our thanks to Ambassador Ovind and to Mr. Kløver for this gesture, the gift of a special edition of Roald Amundsen’s diaries.
These diaries will serve as a symbol of the shared history and longstanding friendship between our countries.
Alors que nous célébrons les 150 (cent-cinquante) ans de la Confédération, saluons également le 75e anniversaire de nos relations diplomatiques.
(As we celebrate 150 years of Confederation, let us also salute the 75th anniversary of our diplomatic relations.)
Norway is an important partner to Canada and I look forward that partnership continuing to flourish.
Thank you. Merci beaucoup.

The speech by the Honourable Geoff Recan, Speaker of the House of Commons of Canada

Speaker Furey, Your Excellency, Mr. Klover, Mme L’Heureux, fellow parliamentarians, distinguished guests,  mesdames et messieurs,
For 75 years Canada and Norway have enjoyed warm diplomatic relations, and that is indeed cause for celebration.
But our friendship is much older than that; long before 1942, your explorers and our first peoples found each other, in the snowy landscape of the Canadian Arctic.
As part of his journey to the lands now known as Nunavut, Roald Amundsen became friends with the Inuit in the region.  In the two years he spent in the hamlet of Gjoa Haven, accompanied by a small crew, Amundsen not only to survive, but to live comfortably in the Arctic.

During his time in Gjoa Haven, Roald Amundsen developed a great respect and admiration for his Inuit teachers, who shared with him invaluable traditional knowledge that would prepare him for his later expeditions.
This special edition of the Amundsen diaries is more than a valuable and informative travel record of Norway’s greatest explorer, although it is certainly that.
It is also a reminder of the mutual respect that was born during Amundsen’s time in Nunavut, and that has only grown through the years, between Norway and Canada, two distant but kindred neighbours.
The Inuit of Gjoa Haven taught Roald Amundsen well, and armed with this knowledge, he later went on to lead the Antarctic expedition which was the first to reach the South Pole.
Each in their own way, they were trailblazers, extending humanity’s horizons in search of a better world.
Thank you again for this unique and precious gift – it will be a symbol for us of the enduring friendship between Norway and Canada.
Takk skal du ha (Thank you)

With his own words and terminology of that time, Amundsen gives us a rare insight into day-to-day interaction with the Inuit, how they learned to know each other and learn from each other.

The relationship between Amundsen and the Inuit was characterised by mutual respect.

Together with Amundsen’s scientific background, the traditional and local knowledge gained from the Inuit was a key factor in his later successful expedition to the South Pole.

By trading everyday products, Amundsen gathered what is today the world’s most comprehensive collection of Netsilik artifacts.

Several of these items were transferred in recent years back to the Nattilik Heritage Centre in Gjoa Haven, where Amundsen lived for 2 years.

The Museum of Cultural History in Oslo, together with the Heritage Centre, and with support from Heritage Canada recently launched a digital portal for the entire collection, making it accessible for everyone to enjoy.

This special edition of Amundsen’s diaries has been made with the same goal in mind: To share knowledge about our common past with Canadians and the wider world.

Such knowledge sharing is essential, both to understand the past, but also to prepare ourselves for the future.

The new agreement on research cooperation, recently signed by the Arctic States, is an example of this attitude in a circumpolar context.

Roald Amundsen was, more than 100 years ago, a living example of this attitude.

The special edition of his diaries is therefore a fitting symbol to mark both our 75 years of diplomatic relations and the 150th Anniversary of Confederation.

The speech by Mr. Geir O. Kløver, the director of the Fram Museum

Hon. Speakers
Excellencies
Senators
Members of Parliament
Distinguished guests,
While exploration diaries can be boring, full of short sentences, details on wind, weather and getting from a to b, the Amundsen diaries is a joy to read. He is obviously having a good time, being away from home for a minimum of three years, in the rough conditions. But it is when they meet the Ogluli and the Netsilik Inuit it becomes really interesting.

I find it quite amazing how much details Amundsen have picked up from the Inuit’s daily life and traditions, how well they communicated and the friendship they developed. Providing each other with skills, knowledge, equipment and resources the other did not have.

I think Amundsen’s personal diaries from the Northwest Passage is an important document from the age of exploration, on how European explorers should have behaved, leaving both the visitors and the indigenous peoples better off, richer in mind, richer in experiences.

24 March 1904
All the Eskimos went hunting this morning. I accompanied them. Walking into a biting wind is not enjoyable. My hunting companion noticed that my nose was turning white, so he sat down to remove one of his own kneewarmers which he stretched over my nose. That was helpful. He was cold, but less than me.

1. July 1905:
Several Eskimos depart tomorrow for Illuillich to hunt reindeer. Our faithful friend Ugpik is among them. We will be sad to lose him. A more open, honest and straightforward man is impossible to find. He has been a great help to the expedition. I gave him a parting gift this evening – if one can speak of parting with these people at all.

I like to think that Amundsen never really left Gjoa Haven. In his home, his skylight and glass door panels are enlarged photos from his two years there. They can be still seen in his house. His friend Ugpik, the Angakkuq (the intellectual and spiritual figure of the Inuit) and his vessel Gjøa at anchor in Gjøa Haven Bay. Every single day for the rest of his life, he was reminded of his years in Arctic Canada. When he entered his house, when he walked up the stairs to his office and bedroom, and when he went into his kitchen and bathroom. Fittingly, today there are several features in Gjoa Haven named after Amundsen.

On behalf of the Fram Museum, I am honoured and I am sure Amundsen himself would approve, that his personal and private diaries from his years in Arctic Canada, will now be part of the Canadian legacy.