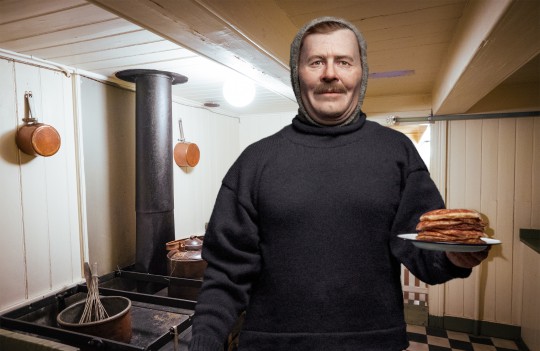 120 years after he first set his foot on the Fram, the most famous cook on any Polar expedition is back where he belong. The Swedish model maker Cathrine Abrahamsson has made this time travel possible.

Lindstrøm was a Norwegian cook and polar expeditioner who participated on three of the most famous Norwegian polar expeditions: the Gjøa Expedition, and the 2nd and 3rd Fram expeditions. His good reputation and fame are a result of the good food he made and that made him known as the best of all polar cooks. Lindstrøm was also the first to sail round the entire American continent.

The model is created by a team of modelmakers in Sweden, the leader of the project beeing Cathrine Abrahamsson. The process of making this model was a long and intricate one since there are limited photos available of the famous polar cook. This hyper-realistic reconstruction of Lindstrøm’s face was made by the sculptor and archaeologist Oscar D. Nilsson and by Eline Kumlander.

The artist and model maker had a hard time parting with Lindstrøm after working on him for several months.