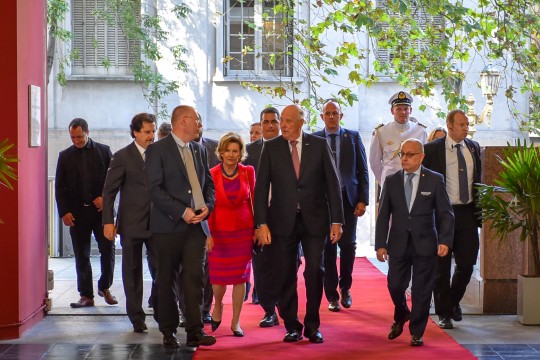 The exhibition at the Argentinian Ministry of Foreign Affairs

During the seminar with the same title, His Majesty King Harald and Argentinia Foreign Minister Jorge Faurie spoke about the good cooperation between Argentina and Norway in the Antarctic, while Fram Museum Director Geir O. Kløver spoke about Norway’s history in Antarctica, focusing on the achievements of Captains C.A. Larsen and Roald Amundsen and the support they received from Argentina.

Kløver shows the dignitaries around the exhibition

The seminar was also attended by Norwegian Foreign Minister Ine Eriksen Søreideand Norwegian Minister of Trade, Industry and Fisheries, Torbjørn Røe Isaksen. The seminar was followed by the signingen of a MOU of Antarctic Cooperation between Argentina and Norway.

His Majesty King Harald of Norway

The speech given by His Majesty King Harald of Norway can be read here.