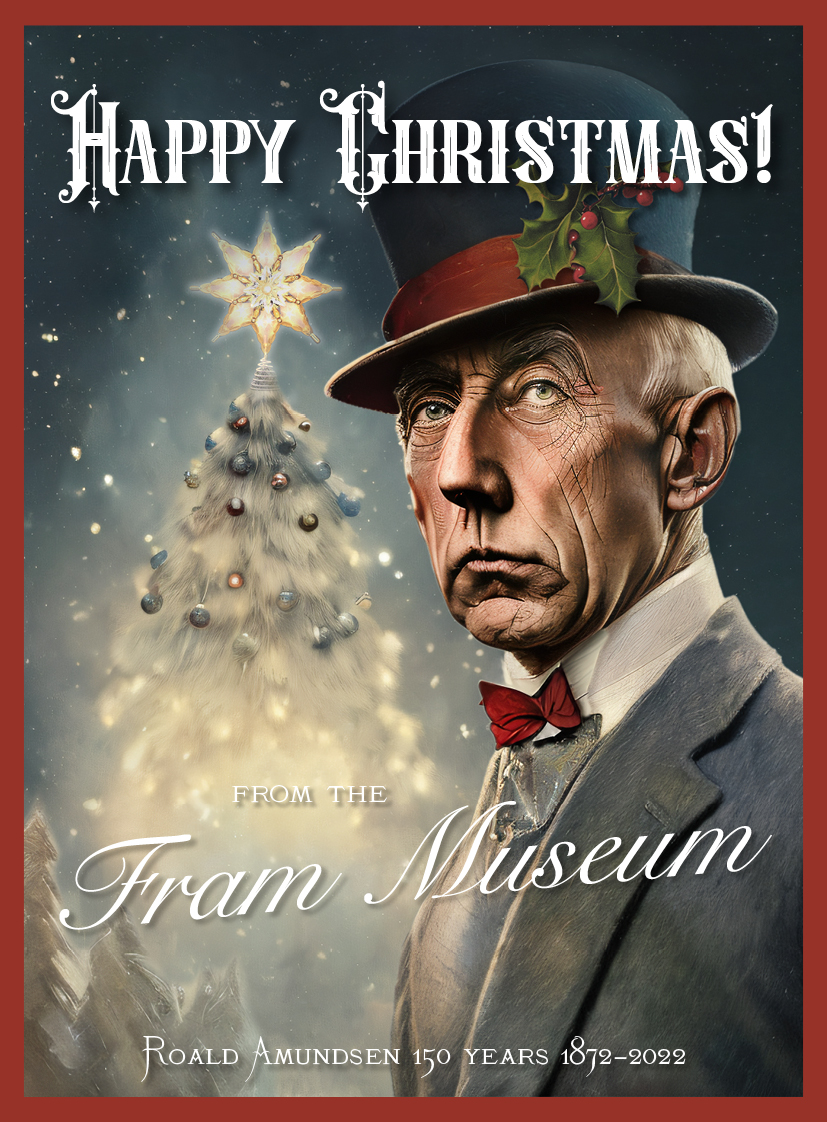 Utdrag fra «Lessons From The Arctic»

Christmas Eve was celebrated at 149°E.lgd, and 53°S.lat.w. During the morning, it was tidied up everywhere – swept, washed and decorated. At 11.30 a light lunch with aquavit and cigars was served. Then the decorating below deck began. The starboard side, which was used as an ordinary passageway, was decorated with flags and Fram pennants. Beside the door to the forward saloon hung a banner with “Happy Christmas 1910” in red and green letters. Lindstrøm decorated the Christmas tree, which had been ordered for the occasion. It could be folded together like an umbrella, a real work of art. Nilsen and Amundsen decorated the forward saloon with flags and greenery. The large gramophone was hung down in a sling, behind a curtain, inside Amundsen’s cabin with its horn facing out in the saloon. At 5 p.m. everyone was assembled for a better dinner, with one exception, Nilsen. He took the helm and was alone on deck, so that the rest of the crew could enjoy a full evening of festivities. The engine was stopped so both engineers could be present. There was a solemn atmosphere and subdued lighting. Suddenly, Amundsen put the hidden gramophone on. “Silent night, holy night” sung by Herold flowed out in full force. All were visibly moved, tears could not be held back by some. Prestrud wrote: The simple and so memorable song turned 15 weatherbeaten men into children again. Everyone’s thoughts followed the same course, the different Christmas Eves one had experienced seemed like a long row of branches with blinking lights – getting smaller and smaller right to the first time we were able to hold mother’s hand to go around the Christmas Tree.

Amundsen made a speech for the loved ones at home and they were toasted in Madeira. Lindstøm served oxtail soup with Madeira, then pork chops, asparagus and celery with a dram and beer. For desert, which consisted of the finest pastries, cream rolls, different kinds of tarts and fine chocolate cookies, Madeira, sherry and a glass of champagne were served. There was lively conversation and the gramophone played various numbers, of which “Harlequin’s Millions” and “Aase’s Song” were favourites. After dinner, Prestrud sang a newly composed ballade about the crew and life on board.