On June 24th 1893 the Fram set out on her first expedition. Fridtjof Nansen was in charge of the scientific side and Otto Sverdrup captained the ship. The voyage along the rugged coast of Norway proved a touching farewell with her homeland. The Fram and her crew were given a rousing send-off not only at her ports of call, but also in countless hamlets and fishing villages along the coast, as well as by the ships she met en route.

On July 21st of that year the Fram left Vardø, on the northern tip of Norway, bound for the New Siberian Islands, and by September 22nd she had reached the ice.

Her subsequent drift across the Arctic Ocean confirmed Nansen´s theory to the hilt, locked in the ice, the Fram was carried for hundreds of miles between the North Pole and Franz Josef Land.

Nansen bids farewell from the lifeboat

The voyage took just over three years, and the course of her drift changed many times, leading those on board to fear that they were trapped eddies or back waters of the main current.

Nor did they get as close to the Pole as Nansen had hoped – the northernmost point reached was 85° 57' N, where they found themselves on October 16th 1895. There is reason to believe, however, that the Fram would have drifted closer to the Pole if the expedition had succeeded in penetrating further east before running into the ice barrier in the autumn of 1893.

The crew on deck

When Nansen realized that the Fram would not get as close to the North Pole as he had expected, he and Hjalmar Johansen left the ship on March 14th 1895 and set out with three dog-drawn sledges in a bold bid to make the Pole across the ice. But the pack ice was in constant motion and they were compelled to abandon the attempt on April 9th, by which time they had reached 86° 14' ̒N. They then set course for Franz Josef Land, where they built a crude hut in which they were forced to spend the winter.

Fram in the ice

In May 1896 they left their shelter and in two lashed together kayaks made their way along the coast, reaching Cape Flora on June 17th. There, by a remarkable coincidence, they met the British explorer F. G. Jackson, who took them back to Norway on board his ship the Windward. By August 13th 1896 they were back in Vardø. Nansen´s account of the journey he and his companion made across the desolate wastes of ice is one of the most dramatic narratives in the annals of Norwegian polar exploration.

Nansen and Johansen in two lashed together kayaks

The Fram, with the rest of her crew, continued to drift westwards along the 85th parallel right up to February 1896, when the current turned her southwards. As Nansen had so rightly foreseen, during the long drift across the Arctic Ocean the ship was subjected to tremendous strain and pressure as vast blocks of pack ice churned and thrust their way onto the deck.

In January 1895 the situation became so critical that stores and equipment had to be carried quickly to safety on the ice and the crew prepared to abandon ship. But the builder´s faith in his design proved justified, and the Fram was gradually eased upwards, out of the crushing grip of the pack.

She finally emerged from the ice off the north coast of West Svalbard on August 13th 1896, the same day that Nansen arrived in Vardø, and on August 20th Captain Sverdrup brought his ship safely to the harbor of Skjervøy, not far from Tromsø. On September 9th the Fram returned in triumph to her port of departure, Oslo, bringing with her a wealth of valuable scientific material from regions of the earth never before visited by man. 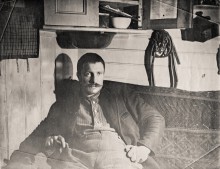 Blessing was the ship medic on the first Fram Expedition. The crew of the Fram was so healthy there was little doctoring to do during the three years. Happily Blessing was also educated as a botanist. He started plant collecting as the Fram sailed along the Siberian coast and continued by collecting algae in the ice. In addition he doctored the expedition dogs. Every month Blessing weighed and checked the expedition members. Unlike most other Arctic expeditions of the time, this crew blossomed and gained weight. 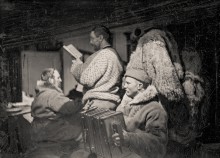 The crew often joined in song and music to keep up their spirits, and off course, to help pass the time. 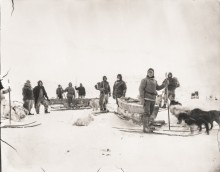 The dash for the Pole

Fridtjof Nansen and Hjalmar Johansen left the Fram on the 26th of February 1895. They lashed their equipment to six dog sledges and would, of course, be completely self-reliant during the whole expedition. No communication with the outside world or retreat was possible, and they would have no chance of finding the Fram again. The first attempt failed. The sledges were too heavy and the ice conditions too difficult so they turned back in order to reduce the equipment load. The sledges were improved and a new attempt was made but this also failed. Finally on the 14th of March they left the Fram at 84° 4' N in a temperature of -32 °C and turned their course northwards. 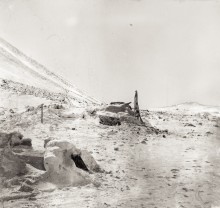 On the northern tip of Franz Josef Land they had to build a shelter for their winter quarters. They hacked away at the surface to make a hollow and then surround­ed this area with stone walls which they filled as best they could with moss. A long pine-log which had been washed ashore served as the ridge-piece, and over this they laid walrus skin. In order to preserve warmth, they refashioned the woollen sleeping bag, so that both of them could creep into it. It was a long winter in the «den», as they called the stone-hut. 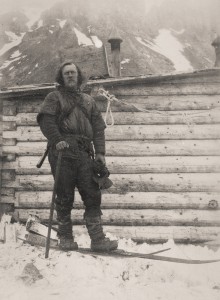 On the 17th of June 1896, quite by coincidence, they came upon members of a British expedition which was on Franz Josef Land.