Gjertsen was second mate on the Fram during Roald Amundsen’s Antarctic expedition 1910-12. 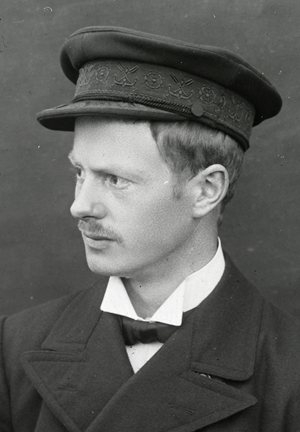 Hjalmar Fredrik Gjertsen was born 6 July 1885 in Porsgrunn as the son of shipowner Andreas Gjertsen. After school he went to sea for three years, moving through the grades from deckboy to sailor. In 1904 he took his mate’s exam at Oslo Maritime School with the best marks. From 1904 to 1909 he went through the Naval Academy at Karljohansvern in Horten. As one of their best students he was given the honour of carrying the train on Queen Maud’s dress during the coronation in Nidaros cathedral in Trondheim in 1906.

In 1909, while at the Naval Academy, Gjertsen participated on Bjørn Helland-Hansen’s oceanography course in order to assist with the oceanographic work on Amundsen’s Fram expedition. At the Naval Museum in Horten it is presumed that Gjertsen was recommended for the Fram expedition by captain Engelstad at the Naval Academy. Prior to the voyage, Amundsen sent Gjertsen to the state hospital in Oslo for quick courses in tooth-pulling and bone-setting. Gjertsen and first mate Prestrud were told of the expedition’s real destination as the Fram left Kristiansand.

While Amundsen and the eight others wintered in the Antarctic, Fram was sailed to Buenos Aires and then on the scientiﬁc voyage in the South Atlantic. Gjertsen acted here as assistant for the oceanographical work, which collected important data from this then little known ocean area.

When the government gave the participants on the South Pole expedition a national reward for their efforts, Hjalmar Johansen was not included as he had died in 1913. This upset Gjertsen, who started a successful campaign so that Johansen’s reward should be divided between his children.

Gjertsen was offered a position on Ernest H. Shackleton’s 1914 expedition with Endurance to Antarctica. He wished to join, but it took too long before his application for leave from the Navy was settled and in the end it was too late.

He did, however, get leave in 1913 in order to attend the Ecole D’aviation Deperdussin in Reims, France to learn flying. Some of the motivation for this was Amundsen’s wish to have an aircraft and pilot on his planned North Pole expedition. When this expedition was delayed, Gjertsen applied to the state to have his expenses for flying training covered, and this was granted. He became a pilot for the Naval Flying Corps at the same time as he attended their flying course. In 1916 he had to make an emergency landing on the Oslo Fjord between Drøbak and Steilene, but he saved both himself and the plane.

During the 1st World War, from 1915 to 1918, he served as captain on the mine-laying ships Glommen and Frøya and in various torpedo boat groups. He saved an English warship from sinking in the Selbjørnsfjorden as well as Fred. Olsen’s steamship Ek. Immediately after the war he was second-in-command on the royal ship Heimdal which, with Bergenske’s Midnattsol, fetched Scandinavian refugees from Arkhangelsk.

With his polar experience, Gjertsen joined the hydrographical investigations in Svalbard in 1920 and 1921 under the leadership of Adolf Hoel on the expedition ship Farm (sic), which were part of the annual Norwegian expeditions to Svalbard that developed into what became the Norwegian Polar Institute in Oslo. Gjertsen participated as hydrograph and second-in-command. Then followed a period as purchasing manager at Stavanger Electricity Works.

In 1924 and 1925 Gjertsen returned to the Antarctic as ice pilot and mate on the ﬂoating whale factory ship Sir James Clark Ross on the first whaling expedition to the Ross Sea. During the preparations he participated in the construction and discussions of the alterations to the ship to turn it into a factory ship. The following year he was captain on the factory ship NT Nielsen-Alonso on the third expedition to the Ross Sea, and also here he participated in the preparations and construction.

In 1929 he led the expedition with Michael Sars to the Arctic Sea near to Russia which, on behalf of the government, was to save the sealers whose ships had been destroyed in the ice.

In 1933-35 Gjertsen was second-in-command on Admiral Richard Byrd’s Antarctic expedition. With the title of commodore he was leader for the two ships Bear of Oakland and Jacob Ruppert and captain on the larger ship. He was central in the reconstruction of the ships for the expedition. For the next five years he served as the Norwegian Navy’s inspector of ships, where repairs and improvements to the Navy’s ships was a main responsibility.

When the 2nd World War broke out he was head of the Melsomvik Naval Depot. Despite strong security he was able to have the entire coal supply at a value of several million kroner transported to the Norwegian railways in Drammen and Sarpsborg. He was later asked to help administrate the supply of wood to Oslo and Aker.

In 1943-45 Gjertsen was, despite his age, one of the Norwegian officers who were interned in a German prison camp in Poland. His family state that he would have died if the war had lasted a week longer. From 1946 to 1948 he was managing director of Langesund mekaniske verksted, after the original director was charged for being a member of the Norwegian nazi partyNasjonal Samling.